What’s separating SANOL technology from other competitive products, is what we call “Stimulus Activated Nanotechnology Ophthalmic Lens” technology. Since some forms of blue light are beneficial to our body; STEAMЯAYS multi-stage construction blue light guard ophthalmic lens material is at least partially designed using “active” nanotechnology ophthalmic lens technology. Taking into account that many forms of blue light are beneficial to humans, a new type of anti reflection lens coating is proposed. This new coating consists of photonic crystals designed to allow a controlled propagation of blue 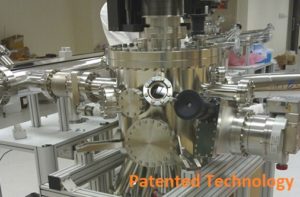 light through the lens. During fabrication, repeating regions of high and low dielectric constants of photonic crystals are created between what are otherwise traditionally formed layers of  anti-reflective (AR) coatings formed at or near the rear surface of a lens (i.e., the lens surface closest to the eye wearer’s face).  It has been found that by strategically positioning photonic crystals between the AR coatings as proposed, it is possible to achieve an additional 40% of blue light filtering due to absorption in the presence of digital light.

SANOL Blue Light Guard™ photonic crystal material is formed into multiple layers of thin films. The angle and order of the thin films are selectively arranged to achieve the maximum possible (or desirable) blue light filtering of the type emitted from digital devices. As previously explained Sanol thin film photonic crystal layers are designed to chemically react (i.e., rearrange molecular alignment of corresponding think film layer material) when the blue light emitted by digital devices strikes the layers causing electrons which have similar vibration frequencies as that of blue light electrons to become activated. When activated by the frequency of digital blue light, the molecules of the thin films become rearranged to form new patterns with widths ranging from 70-85mm, 165nm-185nm, and 195-250nm.

The energy of the digital blue light is absorbed by the thin film crystal layers and contributes to the molecular arrangement transformation.  Excess energy is converted to heat; since during that vibration, the electrons interact with neighboring atom electrons and convert the vibrational energy into thermal energy.

This makes the atoms speed up, collide with other atoms in the material, and then give up that energy as heat from the vibrations. The energy is emitted directly to environment as heat using as a cooling media the frame which surrounds the lenses.